It was Karl Landsteiner who discovered the A, B and O blood group system, hence the four blood groups A, B, O and AB. For this scientific achievement, he was awarded the Nobel Prize for Medicine and Physiology on 11 December 1930. Together with P. Levine and Alexander S. Wiener, he also discovered the rhesus factor (RH+, RH-) in 1940. On the basis of this discovery, a generally usable test to determine the rhesus factor was developed in 1941.

Karl Landsteiner was born on 14 June 1868 in Baden and attended the State Grammar School in the 9th district of Vienna, graduating in 1885.

He studied medicine in Vienna, and was awarded the degree of doctor of medicine in 1891. After this, he studied chemistry in Würzburg, Munich and Zürich. After returning to Vienna in 1894, he worked for a while at the 1st Surgical University Clinic, where he trained in the field of surgery under, amongst others, the surgeon Theodore Billroth (1829-1894). He then served as assistant to Max von Gruber (1853-1927) at the Hygiene Institute of the University until 1897, and was then Prosector at the Pathological Anatomic Institute under Anton Weichselbaum (1845-1920) until 1908. 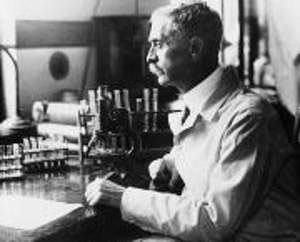 While at the Hygiene Institute in Vienna, he also refined the Wassermann syphilis diagnosis test. In addition, he laid the basis for the subsequent (1984/85) development of the poliomyelitis vaccine by the MS researcher Jonas Edward Salk (1914-1995). He was awarded his postdoctoral qualification at the University of Vienna in 1903. A year after discovering blood groups (1901), he developed, together with the forensic scientist Max Richter (1867-1932), a method for determining blood groups from blood stains.

Because of the catastrophic conditions in Vienna following the First World War, Landsteiner moved to den Haag in the Netherlands in 1919, and in 1922 to the Rockefeller Institute for Medical Research in New York, where he died on 26 June 1943.

In his honour, his portrait was shown on the old 1000 schilling bank notes in Austria.